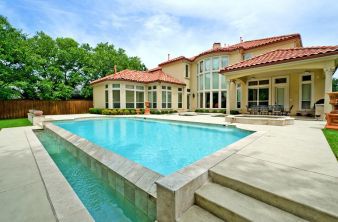 Richardson is a city in Dallas and Collin counties in the State of Texas.[3] As of the 2010 census, the city had a total population of 99,223.[4] In 2014 the population was estimated to be 108,617.[1] Richardson is an affluent inner suburb of Dallas and home of The University of Texas at Dallas and the Telecom Corridor with a high concentration of telecommunications companies. More than 5,000 businesses have operations within Richardson's 28 square miles (73km2), including many of the world's largest telecommunications/networking companies: AT&T, Ericsson, Verizon, Cisco Systems, Samsung, MetroPCS, Texas Instruments, Qorvo, and Fujitsu.[5][6]

As of 2010 the city has continued to be recognized every year since 2004.[11] In 2011 the Texas Recreation and Park Society awarded Richardson with the Texas Gold Medal for excellence in the field of recreation and park management.[12][13] In 2014, Richardson was called the "5th happiest mid-sized city in America" by national real estate website and blog, Movoto.com, based on a number of metrics, such as low unemployment, low crime, and high income.[14] Also in 2014 Richardson was named America's 17th Best City to Live in by 24/7 Wall St., based on crime, economy, education, housing, environment, leisure and infrastructure.[15]

Enter this wonderful town home that offers wood floors in the entry and dining room as well as a kitchen that will thrill the family chef with stainless GE appliances, an...

PREPARE TO FALL IN LOVE WITH THIS ONE STORY HOME WITH PRIVATE BACKYARD SPARKING POOL - SPA AND PERGOLA. THIS HOME FEATURES 4 BEDROOMS - 3 BATHS - STUDY WITH FRENCH DOORS...

WELCOME HOME! Fully updated, this very desirable community in the heart of Richardson near UTD in the neighborhood featuring mature trees. This stunning home has been c...