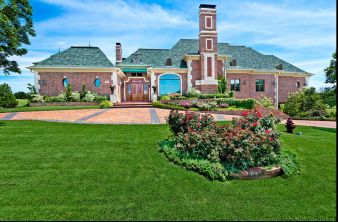 Plano (/pleno/PLAY-noh) is a city in the state of Texas, located mostly within Collin County; a small portion extends into Denton County. The city's population was 269,776 at the 2010 census, making it the ninth most populous city in the state of Texas (Corpus Christi is ranked at #8 and Laredo is ranked at #10) and the 70th most populous city in the United States.[4] Plano is twenty miles northeast of downtown Dallas. This city is home to many corporate headquarters: Alliance Data, Cinemark Theatres, Dell Services, Dr Pepper Snapple Group, Ericsson, Frito-Lay, HP Enterprise Services, Huawei, J. C. Penney, Pizza Hut, Rent-A-Center, Traxxas, Siemens PLM Software, and Toyota Motors USA. In 2005, 2006, and 2011, Plano was designated the best place to live in the Western United States by CNNMoney magazine. In 2006, Plano was selected as the 11th best place to live in the United States by CNN Money magazine.[5] It was also selected as the safest city in America in 2010[6] and 2011 by Forbes.[7] Plano schools consistently score among the highest in the nation.[8] Plano was rated the 10th Best Suburb for Education in the Nation in 2014[9] due to having one of the lowest student-teacher ratios (14 to 1), a high school graduation rate of 94 percent and some of the highest test scores in the nation. It has been rated as the wealthiest city in the United States by CNN Money,[10] and the United States Census Bureau declared Plano the wealthiest city of 2008 by comparing the median household income for all U.S. cities whose populations were greater than 250,000.[11] In 2008, Forbes.com selected Plano, University Park, and Highland Park as the three "Top Suburbs To Live Well" of Dallas.[12] The annual Plano Balloon Festival and the Plano International Festival are two of the city's premier cultural and entertainment events.

Courtesy of Compass RE Texas, LLC.

Must see home in a well established neighborhood in Plano with a pool!!!!! This home offers an eat-in kitchen with granite countertops and travertine tile. Bamboo throu...

Beautiful 3 bedroom house with office that can be 4th bedroom. Two back yards - one original on the back and one additional on the east side with deck. Complete sun room ...

Investors only due to tenant occupied until February 2021. The charming 2 story duplex conveniently located in Plano close to Hwy 75, 190 and Dart Train Station. Gorgeous...

Ready for immediate move-in! This charming 2 story townhome has an open and inviting floor plan. Kitchen with island and large breakfast area is open to the great room. G...