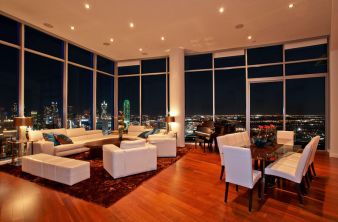 Dallas is a major city in Texas and is the largest urban center of the fourth most populous metropolitan area in the United States. The city proper ranks ninth in the U.S. and third in Texas after Houston and San Antonio.[8][9] The city's prominence arose from its historical importance as a center for the oil and cotton industries, and its position along numerous railroad lines. The bulk of the city is in Dallas County, of which it is the county seat; however, sections of the city are located in Collin, Denton, Kaufman, and Rockwall counties. According to the 2010 United States Census, the city had a population of 1,197,816. The United States Census Bureau's estimate for the city's population increased to 1,281,047, as of 2014.[2] The city is the largest economic center of the 12-county Dallas / Fort Worth / Arlington metropolitan area (commonly referred to as DFW), which had a population of 6,954,330 as of July 1, 2014, representing growth in excess of 528,000 people since the 2010 census.[10] The metropolitan economy is the sixth largest in the United States, with a 2013 real GDP of $448 billion.[11]

In 2013, the metropolitan area led the nation with the largest year-over-year increase in employment, and advanced to become the fourth-largest employment center in the nation (behind New York City, Los Angeles and Chicago) with more than three million non-farm jobs.[12] The city's economy is primarily based on banking, commerce, telecommunications, computer technology, energy, healthcare and medical research, and transportation and logistics. The city is home to the third-largest concentration of Fortune 500 companies in the nation.[13] In the latest rankings released in 2013, Dallas was rated as a "beta plus" world city by the Globalization and World Cities Study Group & Network,[14] and was 14th in world rankings of GDP by the Organisation for Economic Co-operation and Development. Located in North Texas, Dallas is the main core of the largest metropolitan area in the South and the largest inland metropolitan area in the United States that lacks any navigable link to the sea.[15] Dallas and nearby Fort Worth were developed due to the construction of major railroad lines through the area allowing access to cotton, cattle, and later oil in North and East Texas. The construction of the Interstate Highway System reinforced Dallas' prominence as a transportation hub with four major interstate highways converging in the city, and a fifth interstate loop around it. Dallas developed as a strong industrial and financial center, and a major inland port, due to the convergence of major railroad lines, interstate highways, and the construction of Dallas/Fort Worth International Airport, one of the largest and busiest airports in the world.[16]

Courtesy of The Michael Group

Listing courtesy of The Michael Group.

UNIQUE 4 BEDROOM, 3 BATH UPDATED HOME ON A HUGE LOT IN A GREAT LOCATION NEAR WHITE ROCK LAKE. Nestled in the rolling hills of Buckner Terrace north of I-30, this beautif...

Great neighborhood and desire location. Walk to school and easy access to loop 12 and highway 30. The house is at good shape but need to update. One story single house bu...

REMODELED TO PERFECTION!! Fall in love with this modern and inviting floorpan graced with gorgeous floors, crown molding with tons of windows that flood the home with nat...

Courtesy of JP and Associates REALTORS

Stunning Dallas skyline views from the 4th floor balcony. With a whole-home air purification system, your family will breathe much cleaner and safer air. This new constr...

Courtesy of Compass RE Texas, LLC.

Great opportunity for a gorgeously renovated home on a HUGE lot in sought after Casa View! RV parking, boat parking, pull through drive-way, room for a pool, this propert...